Leave it to Beavers 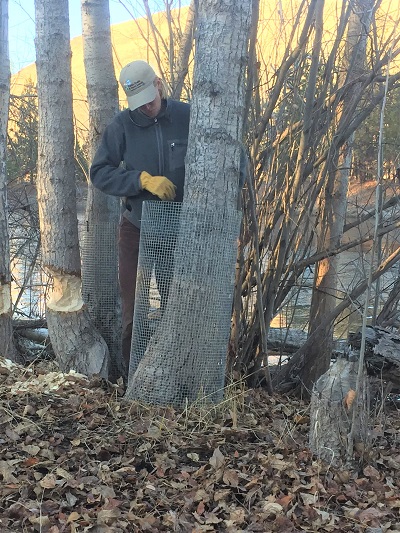 Many of us love to see wildlife, whether on public lands or in our yards. But sometimes we don’t love some of the things those critters might do on those lands. One of our oft-used County Parks, Riverside Park in Lolo, is a beautiful spot along the Bitterroot River. It’s a great place for a stroll, for access to the river, and many species of wildlife call it home. One species in particular has lately been spotted there – or rather, its activities have been spotted. A beaver (or 2 or 3) has cut down some of the trees along the pond’s banks, causing concern for those interested in preserving trees there. Over the years, beavers have also tried to dam up the weir on the lands of the neighboring Home Owners Association, but they’ve outsmarted the beavers for now with fencing to avoid such damming. Beavers cut down trees for a couple purposes. When they build a lodge on a slow-ish moving waterway, they use the materials to dam the flowing waterbody, so the water gets deep enough to their liking for food storage, winter survival, avoidance of predators, and other reasons. They also dine on the trees; they eat the tasty leaves, twigs, and bark of aspen, cottonwood, willow, and alder. In the autumn they go on a binge of tree-cutting to cache them underneath the water. With those branches stashed under water for the winter, they can eat them without having to go on land as often, where more predators lurk. Beavers can live in a ponded area in a lodge, or they may live on a large river like the Bitterroot. When they live along rivers, they do not make lodges but instead tunnel into the bank, and the entrance to the burrow is usually below waterline. At Riverside County Park, we wanted to tackle the issue on our lands to keep the beavers from eating too many of the trees. We know that in the long run, the trees will re-sprout with vigor since they’ve evolved to respond to wildlife chewing on or cutting them down – but for now we also think it’s important to keep large and mid-size trees available for shade, habitat, and beauty. We also knew that in places with good beaver habitat, even if they are removed, they’re simply leaving a void that other beavers will move in and fill. So, we reviewed the recommended tools available for natural resource managers and land owners to address beaver activities. When beavers take down trees, it’s fairly easy and cheap to solve the conflict. Protecting the trees with heavy-gauge fencing stops beavers from accessing them. The ‘tube’ of wire also gives enough space for the tree to grow over the years without being girdled. We did not have the opportunity to fence every tree on the banks of Riverside county park, but we did protect many of them. We connected with the University of Montana’s Wildlife Society student chapter to help us with the effort.  We thank them and all the friendly folks who said hello while we worked.