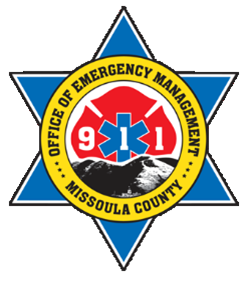 Most of the disasters and emergencies that have occurred in Missoula County involve floods, fires or hazardous materials spills. The earliest recorded disasters were the flood of 1908 and the fire of 1910.

The 1908 flood caused Missoulians great distress. According to Robert J. Wheeler's report entitled, Water Resource and Hazard Planning Report (1974), "the great flood of 1908 resulted from 33 consecutive days of spring rainfall coinciding with rapid snowmelt. These events produced the highest documented flood of memory on the Clark Fork and its tributaries and resulted in disastrous effects to transportation, homes, and other structures."

The 1910 fire ravaged much of the northwest including portions of Washington, Idaho and Montana. In fact, because the fire caused so much destruction, the U.S. Forest Service began fighting fire aggressively in Montana and other parts of the west.

Through the years, Missoula County residents have dealt primarily with fires and floods in terms of prevalent disasters. More recently, hazardous materials spills and accidents have also caused concern to Missoulians.

In April of 1996, a train carrying a tank car of chlorine derailed near Alberton, Montana. Emergency responders answered the call to one of the largest chlorine spills in U.S. history; about 100,000 gallons. More than 250 people checked into local hospitals while emergency crew evacuated the town of Alberton and closed Interstate 90 for over two weeks.